Oh, how quickly we forget how games love to throw you under the bus when you had super cool looking armor, then make you dress like a clown…  Do all devs have this desire? 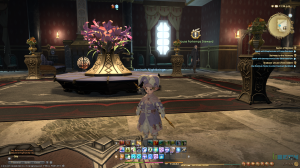 I’ve completed the first few starter quests in Ishguard, enough to be on the quest that will give me a flying mount.  A few particular notes about this so far.

The FATES are “broken”.  In every ARR zone, FATES are run everywhere.  It’s rare you see more than 3 up at any given time.  N. Thanalan is on farm mode right now.  HS zones, every fate is up, all the time.  I found one that was a single target boss-like enemy.  We started pretty much when the clock started and ended up being 4 people trying to take it down by the end.  We failed the timer and I was on full-time healing duty.  The HP scaling doesn’t work (SE admitted this), their damage is significantly higher than ARR and the experience/time spent is less than half of previous content.  I’m guessing this wasn’t so much an issue when people were doing MSQ to get to 60 but now that people are trying to level alts, then it’s really a quite glaring issue.

The quests are better, in terms of pace and quality. I like house Fortemps.  Ishguard has a whole Game of Houses (which I claim GRR Martin has heavily borrowed for GoT) jive to it, which is a fair bit better than the lack of flavor in the previous 3 capital cities (Ul’dah was so-so).  The duties (contained personal quest zones) are larger too, instead of just battle arenas.  It’s cool.

The art/music is quite impressive.  I’ve always been happy with the FF series for both, but this expansion improved a lot.  Well, the clown suits aside. The enemies look better, the zones are amazing, Ishguard is massive… it all works well.  Plus, everyone has buckles.  Ain’t FF without a bajillion buckles.

The combat is more or less identical, if not a fair amount more difficult.  I am in decent enough gear, able to solo large chunks of ARR content.  HS basic enemies seem to be twice as tough.  I’m not really looking forward to my first dungeon.

Picking up the new classes isn’t terribly involved but playing them with what they give you is.  I have no alternate jobs and only a few spare pieces of strength gear.  When I picked up the Dark Knight class, it gave me a weapon, a chest and pants.  I needed to find pieces to fill in the rest.  And as with any expansion gouging is present – the gear for level 30 tanks is about 30x the price of gear for level 25 tanks.  So for the price of one level 30 hat, I was able to fill out my entire slot set.  I played as a DK for the first combat quest, to unlock Darkside.  I failed it a few times since I played it as a DPS until I realized it was designed to be played as a tank.  Once I did that, it was a cakewalk.  (Side note, I usually play a caster, so the GCD isn’t that big a deal.  It is when you play melee, very weird pace change.)

I like the content presented thusfar.  I think in general, it’s an improvement of what came before.   FATES need some number tweaking, there are some balance/bugs that need to be sorted out. As a whole?  This is certainly one of the smoother/slicker expansions I’ve gone through.