This post is going to read a little off for most people.  It is a concept that I have great difficulty communicating verbally and have little experience in trying to get it across in written form.  What I’ll do to start is refer to a particular book (series) – Foundation by Isaac Asimov – that’s core element deals with psycho-history.

Psycho-history is a fictitious (at the time) form of mathematics, where you could predict the actions of a large group of people over time.  It’s akin to telling the future and today’s market of analytics tends is really pushing us towards this reality.  The one most seem to find is election patterns.  There are 2-3 people on the planet who are able to determine the results of an election, through mathematical models, a few months before they actually occur.  The old “opinion survey research” model is being deprecated with these new models. Moneyball also gets into this, where statistics – many of them – replaced older baseball scouting practices. Boston won a World Series with that model.  At the basic level it’s people + averages = outcome.

I’ve mentioned in the past that I love analytics and that as a people watcher, I can make rather quick determinations about strangers in seconds.  I guess it’s a bit like Sherlock and Mycroft.  High functioning sociopaths.  Sounds bad but hear me out.

What happens is as follows.  Every event I experience I digest and decompose.  Significant events tend to linger in my mind and replay over and over until I get all the parts separated.  So let’s say I meet a friend at the pub for a beer.  I’ll break down the weather, their demeanor, what we ordered, the waiter, the crowd, what was on TV, my state of mind and a hundred other variables.  This is all done subconsciously at the time and consciously later if I had trouble with it.  At 35 years of age, I’ve done hundreds of thousands of times and have built a repository of variables and results.  A weather pattern, a table, 2 people and a beer will give you this.  On a Monday you can talk about this topic.  If they cross their arms, you need to say this. And so on.  It’s like a giant Lego set, where each piece combined gives a different outcome.  The thing is, these outcomes are not guaranteed simply highly probable.  If it doesn’t give the result I wanted, then I spend more time trying to figure out why.  99% of the time it’s emotions, which are notoriously hard to compartmentalize.

Given that I have this rather large repertoire of information, I can “predict” the outcome of a given situation with a decent amount of accuracy.  That outcome then triggers another event.  At each trigger, there are multiple possibilities, each with their own odds of occurrence.  As I get further away from the original trigger, my certainty in the final outcome grows dimmer.  As I am looking for an optimal end state, I also look at how some outcomes can be modified to “get back on track”.  The following picture describes the high level process – realize that I mentally process each of these branches. 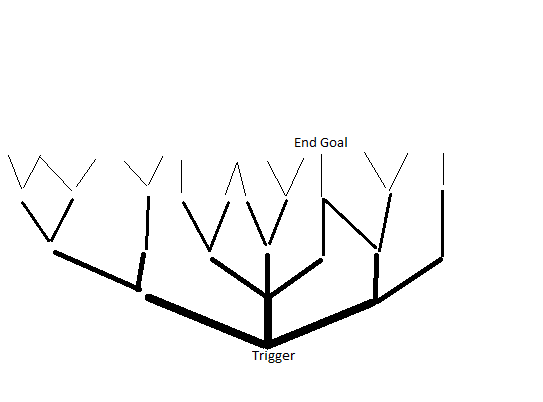 I look back at what I did and what could have gone different, not in terms of regret mind you but in terms of analysis.  Like reviewing a game of chess.  This gives me more tools to work out variable outcomes and refines my existing ones.  I look forward to what’s possible and plan accordingly.  I know I’m going out for supper with the family – a small thing.  I know I’ll need a cup, diapers, a bib, cleaning items, a set of clothes, a booster, a medical kit and a bunch of other things for all the possible outcomes.  Or I know we’ll be hosting guests.  I’ll need coffee, tea, cups, plates, a clean dishwasher, items to be prepped, space for guests, favors, desert, places for people to be, kids to play and so on.  If there’s a possible variable, I’ve likely considered it.  The odds of of it happening determine my next steps.

Where it turns into paralysis is that I do this for everything and that I am never really living today but living tomorrow, or the week after, or 10 years down the road.  I have tremendous difficulty in appreciating the moment, outside of seeing a planned outcome being realized.  Spontaneity is appreciated only in the challenge is presents for future planning, not on the immediacy of the event.  So this makes Christmas and my birthday somewhat difficulty for people, as I’m not tremendously exited at gifts (of which I’ve guessed 95% of them ahead of time).

This one you’re likely just not to believe and that’s OK.  Simply put, I have a fair amount of deja vu on a regular basis.  Not the “this feels familiar” feeling but the more surreal out of body aspect.  The easiest comparison is athletes and sports.  Elite athletes work on instinct and the best of them often report that the game simply slows down for them.  They can see everything at the same time, even themselves.  They can see what will happen in the next instant and be prepared for it.  I play hockey and that happens rather often.  What I get above and beyond that is a full fledged memory of an event as it happens.

I remember my first day of grade 8 as I had to swap schools.  I had a vivid dream the night before of the first day and sure enough it rolled out as I had dreamed.  The kicker was that I knew everyone’s name before having met them.  It’s been an odd trip since then.

The final side effect, and one I share with many introverts, is the need for solitude and general lack of energy for social events.  It is very draining to always be on and it makes it taxing on my family as well.  I tend to live in the future which makes it hard for people to understand my point of view – either they are impressed or intimidated.  Very little middle ground unless you’ve known me for a decent amount of time.

I will finish off with the positive side of this story and there certainly is one.  This rather unique skill pays very well in the market.  I can take extremely complex issues, memorize the variables and lay out options.  I have a near encyclopedic memory.  I have enough social skills to interact with people.  I’ve become comfortable and accepting of the skill set, which makes me relatively happy.  I work diligently for positive outcomes, which is of benefit to those I wish to protect (wife, kids, family, friends).

My friend Luc has a post up about his top 5 travel spots.  Well friend might be too strong a word, depending on the hockey teams playing.  I’ve been kicking around a similar idea for a while now and his post is triggering this one.

Pre-amble.  I am not big on travelling.  In fact, I have a rather large distaste for it.  I like the destination part but the trip itself, garbage.  I think it’s just a bad taste with US travel, really.  Any other country, customs practically gives you a high-five for showing up.  That’s another topic though…

Believe it or not, I am a rather large history fanatic.  History as in anything that occurred before the West was colonized.  I really love stories and the best ones are legends from other cultures. The legend of Gilgamesh is fascinating and is nearly 4000 years old.  Japanese feudalism, China’s dynasties, Egypt’s emperors, Greece and Rome’s democracy, South America’s empires, the European dark ages up until the monarchy sets in the 1700s.  Each one has a very large impact on today’s society, even though most don’t realize it.

Funny anecdote, my wife was reading a Disney book to my eldest and they pointed to a character they didn’t recognize.  I said “that’s Merlin”.  Both said, “who’s that?”.  The recognized Pinnochio, Belle, Cinderella and all the other ones but not Merlin.  I still have trouble understanding how a grown-up today would not know that name.

Ok, to the main point now.  Top 5 places I would like to visit!

How bout other people?