Before I get depe into FF14’s crafting system, I want to look at crafting in MMOS in general. Crafting is for many games, the only tangible player-created item set, meaning it has personal value. It’s a stamp on the world, saying “I did this”.

Crafting doesn’t operate in a vacuum, it has its own economy. Faucets and sinks are required for any balanced economy to work long time. Currently, the major sink is power creep. This means items lose value because better items come along. Some games implement destroying items, either through combat or as crafting materials. The former is by far the most effective but also the most difficult to balance.

Faucets are all over the place. Crafting materials come from anywhere and the resulting items are often on-par or of lower quality than what you can get from other means (questing, dungeon, world drops). If the faucet is too large, then the value is nil since they are too easy to acquire.

UO had an interesting mechanic for crafting. There were faucets, though limited, for crafting and item drops. Some items required multiple inventive paths to complete, like the old aquarium. Tinkering, carpentry and a few more had no real world drops. Plus, there were tons of sinks. Break on use, loss on death among others.

EQ had a multi-stage crafting process but the items had little to no value, outside of 1 or 2 per skill tree. There were no sinks, unless you let a corpse rot… but no one did that past level 10.

Wow put in a simple crafting UI at the start. Items had some minor value while leveling but a lot of value at max level. That has changed today where the items crafted have no value outside of 3 skills and are used more as combat buffs.

EvE is based on this concept. Few faucets, many sinks, an economy 100% on crafted items. Unfortunately, the game is based on a PvP mindset that is difficult to compare to PvE focused games.

Nevewinter’s crafting is more of a minigame, which can be done offline. It’s fun but not really well integrated.

GW2 is a bit too much like WoW for my tastes.  Crafting is queued, has no value outside of max level and even then, barely any impact.

FF14 is a slight change of pace. Crafting is an integrated system with multiple steps and dependencies.  There are really few faucets since there are no world drops.  This makes crafting rather important in the large scheme of things.  Even the low level stuff is used by other players, since one character can play every class.

I’m certainly curious as to how the next few games will address this system.  It’s so integrated into the MMO mindset now, that we’re sure to see it.  Just not sure which variant.

A few more hours into Neverwinter and I’m still having fun.  The soft launch/beta issue is still quite evident, what with daily downtimes, sometimes more than once a day.  And there are bugs/exploits abound.  Bannings have even started for some people exploiting the Foundry.  I think bans are heavy handed, especially in a agreed-upon BETA status, though perhaps they are only banning people that haven’t spent money yet.  That exploits are being found though, that’s a good thing.  Means players are playing!

I have this thing with crafting in MMOs.  In Ultima Online I had 2 characters who only crafted, one of which was a GM tinker.  That might resonate with some.  EQ2, EvE and a couple others have complex systems but by and large, crafting in MMOs today is more or less a joke.  SWTOR embraced that thought and had crafting done by NPCs.  Neverwinter uses the same concept, crafting as a something you can do in combat, and puts in a web-service to manage it.  I am certain that I have more hours in the crafting queue than I have  played as a character in-game.  Right now, I have two 18 hour queues running.  And I still can’t make gear that’s high enough level for my character to wear.  /sigh.  I’m going to stick with it though, just to see what comes of it.  A good thing is the “rare” crafting items you can make, that appear on timers.  That’s cool.

The game also comes with an LFG tool, one for skirmishes and one for dungeons.  The first one is simple enough, lasts about 10 minutes.  You’re likely to be in the queue longer than in the fight.  The dungeon queue is a tad bit longer but the dungeons themselves are quite long.  They are basically corridors of trash followed by a mini-boss.  Usually 3 minis then the big one.  They tend to all follow the same pattern.  At a given health percentage/time delay, they summon allies.  The problem here is that tanks are not able to pick them up quickly enough as threat management isn’t yet balanced.  On some end boss fights, I’ll spend the last 30% or more running around trying to not get hit by the spawns.  And that’s with every -threat skill I can get.  The health pools/damage abilities of the bosses aren’t yet balanced either.  One skirmish boss took about 5 minutes to kill.  Another dungeon boss could 2 shot some players.  Beta is Beta.

Another quirk for group play is the loot system.  Every magical item (green, blue, purple) is un-identified, meaning you have no idea if it’s an upgrade or not.  Every group I’ve been in, there’s been 1 guy(gal) who rolls a /need on every drop.  I can’t tell if it’s an upgrade or not and there’s plenty of restricted gear – i.e. a mage can’t wear rogue gear.  Why a mage can roll need on gear that they cannot use is crazy.  And boss drops, for me at least, have been static.  Meaning I’ve killed the guy 4-5 times and seen the same item drop every time.  Finally, there are chests in these runs.  Some can be only opened once, others multiple times.  It would be nice for some consistency. 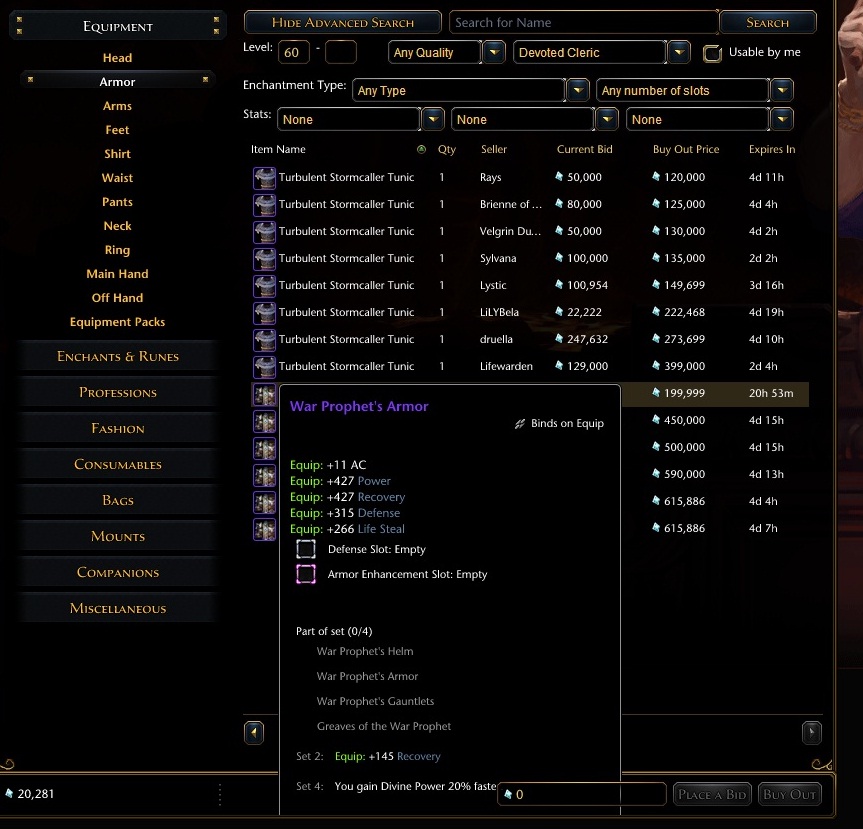 Gear can be expensive

I talked a bit about the F2P aspect, and the cash stop.  From what I’ve seen so far, there’s next to no need to spend actual money yet.  Sure, you need to spend real cash to get a 100%+ speed mount (default is 50%) or to upgrade your companion past level 15, but they aren’t really requirements as you can easily get by without it.  Even inventory management isn’t too bad.  The Astral Diamonds used for the Auction House are a bit different though.  If you complete 3 dailies (Foundry, Skirmish and Dungeon) you get 1000 diamonds a piece.  Run 3-4 skirmishes during the event, and you get 1000 per as well.  If everything lines up perfectly, you can finish the day with 5000-6000 diamonds.  I don’t see how you can reach the 24,000 daily cap yet but maybe that’s in the higher levels.  The best gear on the AH is about 200K per piece and by my math, you’re going to need to buy diamonds with cash or get lucky with drops.  The “cheap” stuff is 50K per piece and seems well enough.  We’ll see how that ends up in the end.  One thing I think will sell the most is Enchanted Keys, which open Nightmare chests.  You get these chest randomly (I have 20 or so) and the items are usable anytime once you have a key.  And the key only comes from the cash store.  Cryptic has been smart enough to send a system message whenever a player unlocks the “rare” mount from these, which appears to be every other minute.  A whole lot of “he won it, I should be able to as well”.  Still, for the average player, I don’t think there’s a huge motivation to spend money.  Maybe with more classes or races?

The next post on the game will discuss the Foundry system and player development.

In the meantime, here are my suggestions to the devs: