We have WoW art style, with distinct character outlines since the start. However it’s moved away from tab target to smart target, and red/blue markers on the ground. WoD will finally have target outlines as well. It’s evolved.

Neverwinter, a LAS/action game, uses outlines and AE effects given the mouselook aiming features. It’s a more realistic art style, making it damn near impossible to find someone in the thick of things. BUT, since it’s soft lock and AE for nearly everything (including healing), it works.

SWTOR uses cartoon style graphics for a seemingly endless supply of humanoids. I found it a mess in regular PvE but the group instances aren’t too bad as the character types are often different. Plus tab targeting helps drastically.

FF14 uses tab targets and a full skill bar, though in reality few skills. The art style is VERY unique and it’s fairly easy to spot individual players, let alone NPCs in combat. In fact, you rarely have more than 2-3 enemies at once. Of course, with a requirement for focused combat and targeted attacks, this is vital for success

ESO is LAS + mouselook. Many attacks are AE or smart target. Every frigging enemy is the same though. PvP turned into meat walls of AE spam because you can’t focus target effectively. It also means many skills lose all value if they aren’t multi-target. Plus everyone blends in together and the background. So it’s less about aiming and responsiveness as it is about mashing AE attacks and hoping the numbers are in your favor. 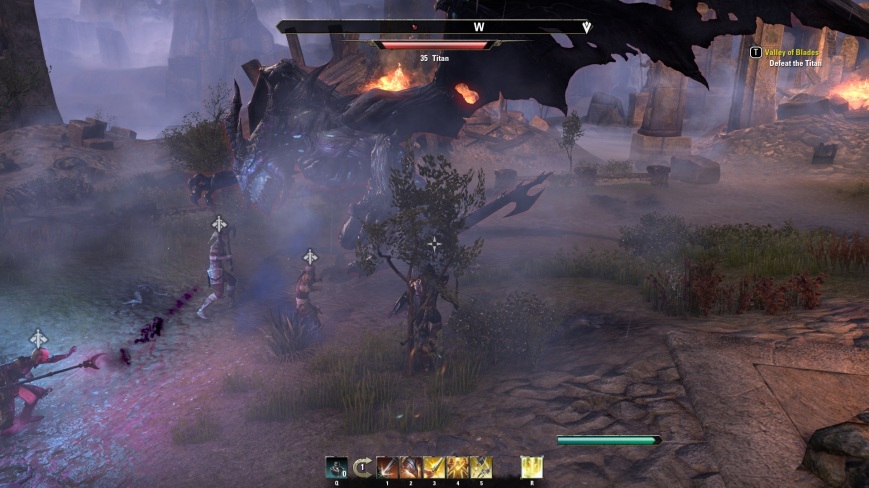 Wildstar is LAS but tab/free target combat. Everything has an AE target as well, making aiming very important. Plus the character diversity helps you quickly ID the players in the field. The more quickly you can make an assessment, the better your odds.

I guess it boils down to offense vs defense. A more realistic game favors defensive style of play and 2 types of skills. Either you spam and get lucky or you cross that skill gap to “elite” and run amok. FPS shooters I think show that well.

A more cartoon, or rather distinct character set, provides more offensive options as you can’t really hide. Everyone knows who you are and you have more information to make the right decision. It removes the skill gap and includes progression.

I wouldn’t be able to say which has the higher skill ceiling as that is more game-specific. It’s certainly an interesting topic.