I clearly remember Age of Conan and Tortage.  This opening zone, from 1-20 or so, was full of voice acting, quality build and was an amazing experience.  Once you left Tortage though, the game turned to a separate beast.  No voice acting at all, huge balance issues, bugs everywhere and next to impossible to progress without future balance changes.

ESO is an interesting beast in that the quality of the content remains solid so far but the bugs are getting absolutely ridiculous. 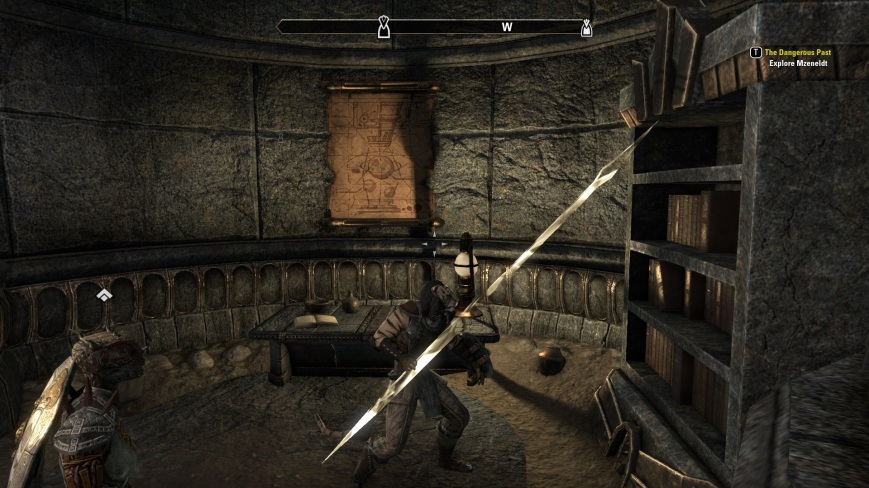 As a Templar, the above bug happens every 10 minutes or so.  My weapon gets replaced with a spear graphic, from one of my attacks.  It sticks around for 2 minutes or so, prevents me from sprinting, looting or interacting.  /reloadui has been used more often than some of my skills.  Some quest markers won’t show – /reloadui.  Stuck in a wall, /reloadui.  It’s buggy to a point where I would quit out of frustration but the rest of the game has such good stuff I keep on trucking.

Don’t get me wrong now, the content that’s behind these bugs is fun, if more sparse.  If the first zone could be considered 100% full, then the next one is about 60% full. 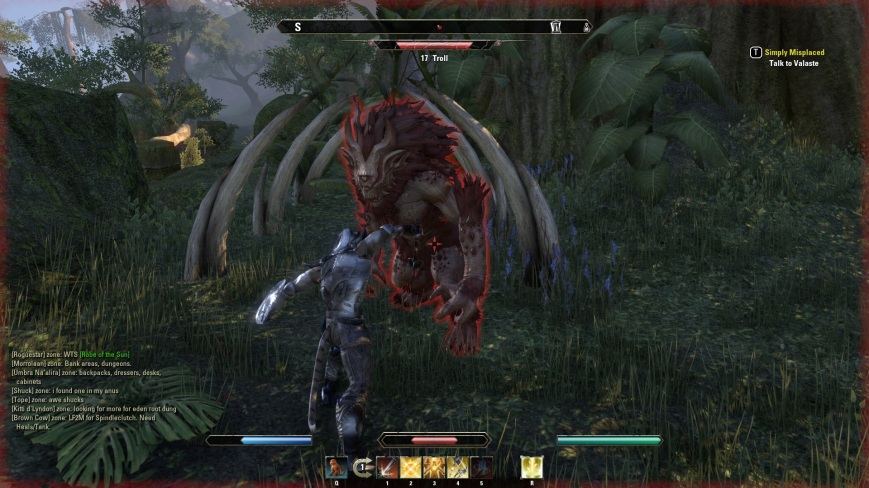 When I tried to finish off the first zone, and it’s dungeon, I hit a “known” bug.  This is one where the first part of the quest has 3 types of failures – either the object doesn’t show, the scene doesn’t trigger or a party member can’t progress.  Our group hit all of those bugs, multiple times.  After all that, we decided to take a trip in the dungeon and everything was ok but the last boss, who requires the quest I guess since he never spawned.

I’ve run dungeons hundreds of times.  ESO uses a trinity with wonky mechanics.  Taunt works fine, I guess but the concept of threat doesn’t.  It’s kind of like GW2 I guess.  Bosses themselves are either bugged or badly balanced.  One boss, a lizard-type, has an instant charge on a random player with no animation or warning.  This charge takes them to 10% life, then applies a DoT over 3 seconds that kills them unless you hit the enemy.  Think about that a second.  Without warning, an enemy will drop on a party member and kill them in 3 seconds unless you can find them and hit them.  In a game where you aim with the mouse, not TAB.

I’m going to honest.  MMOs need a few months of beta testing simply to polish and bug test.  ESO doesn’t really appear to have done much of that.  An end-game bug that prevents people from seeing any end-game content?  How is that even possible?  The content is superb and I am enjoying myself.  But wow, there are some real headscratchers in here.