While the beta of ESO didn’t really float my boat, I found a coupon for the game and decided to give it a try.  A few people are quite happy with it, so why not?  I did a few days of early start, then played this weekend.  I got my kitty cat Templar through about half of the first zone, Auridon.  Just shy of level 12 and the dungeons.  Here are my collected thoughts so far.

Quests are darn impressive.  There’s very little kill ten rats but more of the fed-ex/click here type of stuff.  All of them are fully voiced and multi stepped.  It’s quite organic too, with next to no guidance to find a quest and plenty of help to complete a quest.  Just like the past ES games.  They are also the primary way to level.  I mean it would take an hour of killing enemies to equate to a single quest in terms of progress.

The art is also good, if you like the semi-photo realism.  I don’t see why anyone would play anything other than a Kajiit or Argonian as every other race is a variant of human.  The Kajiit tails are cool to look at.  Zones are pretty spiffy and not to hectic on my laptop.  It is very hard to see any harvesting nodes unless you have a particular skill, which I think is a bonus.

Exploration is awesome.  You find caves, people, quests, locked chests if you bother to look.  I am a solid 20 hours in and have half of the first zone done and am only level 11.  Max level is 50, so if the math holds out, I have a sweet amount of content to go through.  That is very appealing. 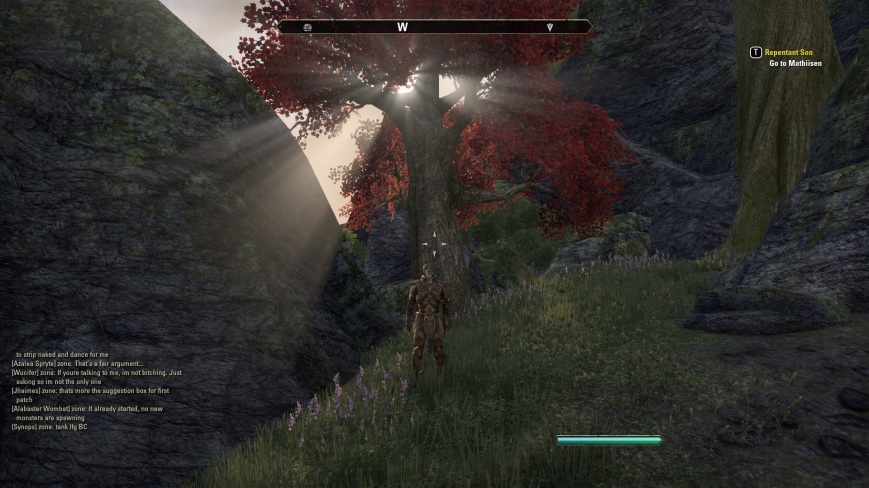 The not so good

Crafting.  Maybe it opens up in complexity but meh.  I’ve researched a few things, upgraded some items but I do not see how the system gets more complex.  The good side is that leveling has next to nothing to do with making items but instead about breaking down items.  Making stuff in different styles, or crafting sets (assuming you have the appropriate recipes) is smart.  Perhaps it’s just that stats in this game are very simple.

The classes are also ho-hum.  There’s a tank, paladin, melee DPS and mage.  All of them share 85% of all skills, so the class specific ones are where you get your flavor.  I played the paladin (Templar) for most of my time and could not find anything fun about it.  The tank (Dragonknight) has some interesting skills, so I’m going to focus on him for a while.

No one will ever say that the ES games were strong on combat.  ESO is no different.  It just feels off.  With little mana or stamina, you’re going to be using auto attack 50%+ of the time.  Long battle?  It’s about chipping away and there’s no real feedback to the game.  Considering you spend 95% of the game’s progress in combat, this is a real big issue for me.

The skills are also a disappointment.  While there are plenty of them, you are limited to only a small amount  (6 total) to use at any one time.  Only about half of all of them are something you’d even bother considering when compared to another.  There’s a lot of overlap and clearly superior skills.  I get that in a sandbox you’re not going to have tons of variety.  It’s just that blah skills combined with a hokey combat system is really off-putting. 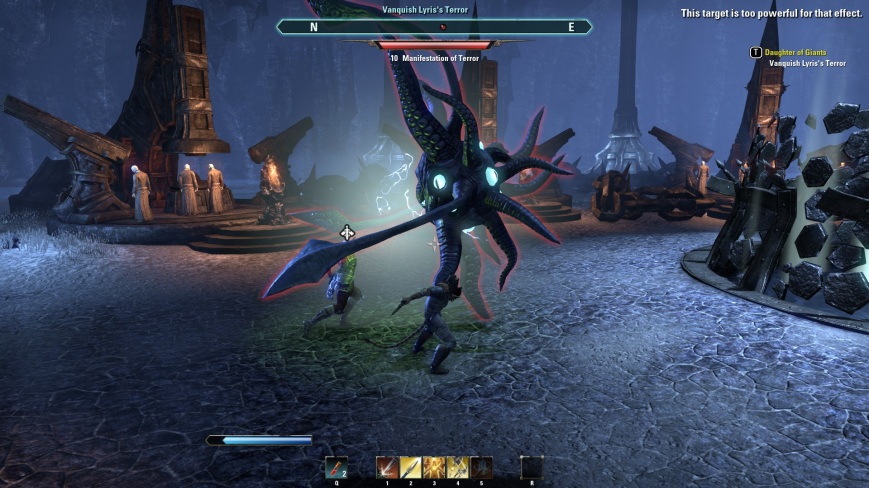 Let’s be clear on that point.  My longterm prospects are dim once I’ve “consumed” the content as the little group content I’ve done has been so piss-poor uncoordinated that I’ve found no fun in it.  It’s right on par with GW2 group content.  The glue of an MMO has to be the people and there’s very little of that here that I’ve found so far.  I’m hopeful though, as time moves on and people get accustomed to the game.