Time is short and work is crazy busy making for nights that end quickly.  A few more detailed posts are being worked on but in the meantime I wanted to add a bit to the previous posts.

First though, I wanted to dwell a bit on D3 itemization.  That horse isn’t dead yet! 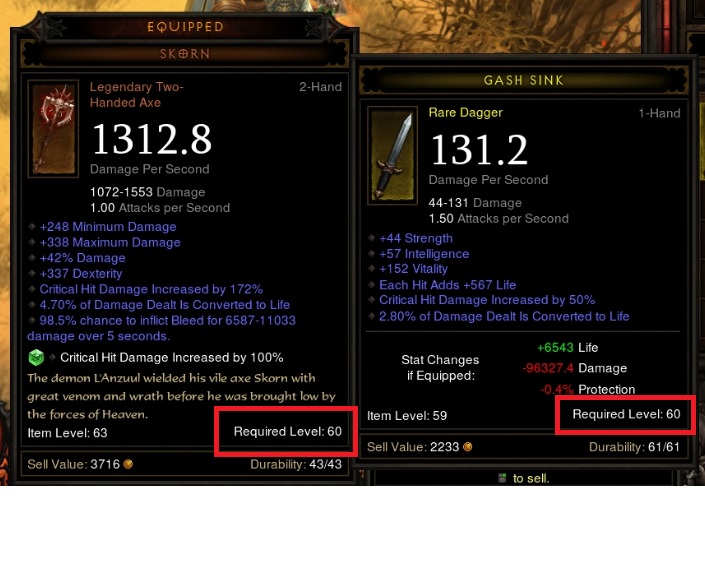 The above shows a fairly good roll against a fairly bad roll.  Look at the estimated DPS loss (character runs at 102K DPS) from a weapon.  That’s a 96% difference in damage from one item.  Take that horse!

Second item is the defense of subscription.  Gaffney posted some stuff defending WildStar’s decision while Jack Emmert will talk about the opposite in a few weeks.  These are both people with significant experience in the field.  Both have seen F2P on their games (Gaffney was with Turbine and NCSoft) and have seen subscriptions as well.

Perhaps we’re at a point in the hype cycle that subscriptions can become niche again and that the MMO tourist avoids it due to the massive F2P options out there but WildStar doesn’t seem to be aiming for niche.  TESO certainly isn’t.

In regards to the PLEX variant WildStar is aiming for, that only works in a closed and extremely well developed economic system.  It works in EvE because everything is player created, everything required sweat equity and everything is relevant, even at max level.  Taking a cue from any themepark, even the recent GW2, economies from start to max level-1 are completely irrelevant 1 month after launch.  I “beat” WoW’s auction house, making a few million along the way – PLEX would have failed hard in that market. This isn’t apples and oranges.  This is apples and nuclear missiles.