Iceborne launched 6 months after the consoles, and there has been a fair chunk of content added in that time.  In the base game, PC was always a fair bit behind consoles, and so I’ve sort of grown accustomed to it.  Seems the devs really want to close that gap, which is great.  Having parity across all platforms is just logical in 2020.

Every month, PC will catch up to console a bit more, as per the following overview. 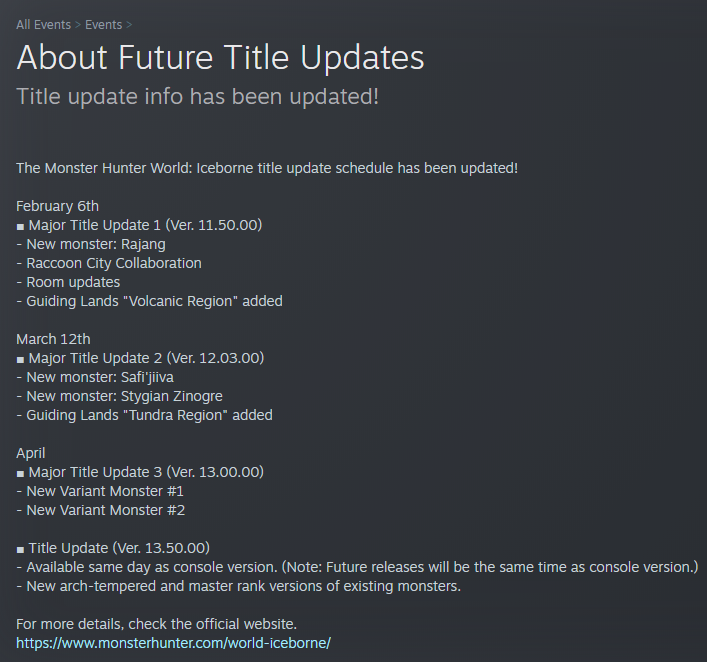 Sidebar for a second.  Feature parity is a requirement for online play.  MHW’s greatest weakness is it’s version of social tools.  It feels like a giant throwback to the LAN days.  If they can get their content stream under control, they can start to focus on larger system changes.  I’m not a betting man, but I would guess than MHW will have a couple test patches on that front, which will work into the next mainline game.

Back to the patch.  The room updates are good (focused on the social aspect), the Raccoon City is ok, but the big thing here is Rajang.  He’s been around in past games, and always at the apex level of challenges.  That continues here, as he has more in common with Goku than Nergigante.

Thematically, the monsters in Iceborne share the common trait of non-stop attacking.  When you first meet Tigrex, it feels like an avalanche of attacks.  When you meet Rajang, Tigrex feels like an old man.  See tips video below.

Add the fact that Rajang hits like a TRUCK, it makes for a fight that is more frustration than fun.  He has a high tendency to combo his moves, jumps around like he’s crushing Red Bulls, shoots a massive laser, and has a dive bomb that will 1 shot most players with next to no notice.

I play Charge Blade, which is one of the slower weapons.  It focused on opportunities after a monster commits, then I strike.  There are very few openings with Rajang, and those that do exist end up being shorter than my attack duration.  So I have to get quite creative.

The good news is that you don’t have to defeat him to open up the volcanic area of Guiding Lands, and he only starts showing up in battles AFTER you do beat him.  His armor isn’t all that good (except his helmet), and I don’t think anyone is looking for lightning weapons.  That told, you may be best just ignoring him until you get to the farming portion of MHW.