There’s something about Batman that clicks with me.  A large part of that has to be related to the animated series in the 90s, which still stands shoulders above most others.  Kevin Conroy’s voice is just tatooed in my mind as Batman (as much as Mark Hamill as the Joker).  It helps that there really haven’t been too many clunker Batman video games (hellooooo Superman64!)

I still recall Arkham Asylum when it came out.  I scraped every bit of that game clean, bugs and all.  It had the metroidvania hooks, a decent showing of the Batman villains and setting, and what can only be described as a superb combat system.

If you haven’t played it in the Arkham series, then you may have in the Shadow of Mordor series.  Fast flowing melee combat, quick traversal of distance between enemies, integration of skills, and the feeling of being absolutely surrounded and coming  out on top.  And I don’t mean you’re a lawnmower against grunts.  I mean that you need to pick the targets and pay attention to surroundings.  Dying is always a possibility.  (Side note, if Assassin’s Creed’s engine could put more than 3 people against you, then it would be a close relative.)

Mechanically, there have been some minor tweaks to combat in the 4 Arkham games (Asylum, City, Origins, Knight).  Melee combat stays the same, but the skill sets change, as do enemy types.  The last game added vehicle combat (meh), but the regular fights were much more strategic than the brawls of earlier versions.

The stories inside the games are ok I guess.  Asylum was pretty solid up til the final fight with a super-Joker.  Origins was more like Mega Man in that you’re hunting different enemies without much of an arcing story.  Knight had two stories, only about the actual Arkham Knight destroying things (redemption arc, naturally), and the other about Batman’s psychosis relating to the Joker (this was a knock out). 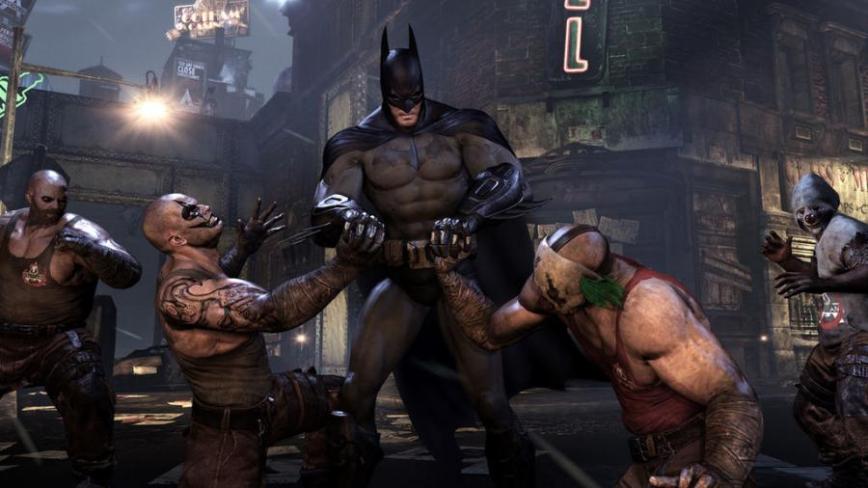 Arkham City.  That one was signature Batman.  A puppet villain.  Interesting villains that don’t take up a lot of space. Catwoman.  Vertical gameplay (the floor is lava in quite a few places).  And the Joker twist, all the way to the credits has been etched in my brain for 8 years (launched Oct 18, 2011).  It was also the last time that I considered the Riddler puzzles “reasonable”.

I’ve been somewhat spoiled with AC: Odyssey in terms of game length.  Sure, that’s artificial padding since the content is computer generated, but the minimap icons!  Arkham City’s content is purposefully places, and the minimap icons are pretty much restricted to the Riddler trophies to collect.  The significant benefit here is that the story is paced and managed.  None of this “the end of the world is upon us, but oh, let’s do this 5 hour side quest.”  There’s a sense of urgency, yet at the same time there’s a lot of meat to chew.  In hindsight, it’s a level of balance that’s really hard to compare elsewhere.

The Game of the Year version (with a ton of DLC) is relatively cheap, plays well on any PC, and doesn’t look like/play like a 2011 game.  I’m still a Batman fan, and most games I play will still be compared to this one.

7 thoughts on “Back to Arkham City”