Let’s do all the dumb.

I’ve been a skeptic of Fallout 76 since it was announced.  Multiplayer games are hard, and Bethesda games have always been more about potential than delivery.  People are still playing FO4 and Skyrim because of the modding community.  Bethesda releases a large game, a big sandbox, plenty of bugs, and let’s the community make with it what they will.  I’ve thought for some time that was rather unique for such a large company, but it seems an understood deal.

FO76 seemed to be more of the same initially.  Quite a few folks were hopeful of simply having the original sandbox but with a multiplayer mod.  Not something that’s easy mind you, but Skyrim was in 2011 and Fallout 4 was in 2015.  It’s not like there wasn’t some amount of time here.

But as the game grew closer to release, it became clear of two things.

FO76 uses the Creation Engine, which was first launched in 2011 for Skyrim.   It was in development for years prior to that.  That is a smart re-use of existing tools.  The error in this is that the engine was built for single player games, and had many years of coding changes with that mode specifically in mind.  It’s a bit like taking a base model car and being passionate about rally racing.  Then using that rally car for drag racing.   Hard to judge if it would have just been easier to go back to stock.

The impacts here are simply in the variety of bugs and the way the game runs.  There are plenty of posts/videos on how the beta ran.  That you could make client-side changes was standard in single player games – and it was here too.  That world speed was tied to frame rate was there.  AI pathing was there.  Pretty much most bugs that exist today in Fallout 4 (and addressed through mods) were present in FO76.

And that’s fine.  Games have bugs.  Releasing a game with bugs is normal.  The type and quantity of those bugs is a different matter.  It was pretty clear Bethesda needed the launch date to hit, even if it could have used another 6 months of work.  (Blizz anyone?)

This was for lack of better terms, an Early Access title released by a AAA developer.  Time will tell if it can get over that stigma.

By now everyone has heard of the bag issues.  The ultimate edition ($200) was supposed to come with a canvas bag, instead shipped with an extremely cheap nylon bag. 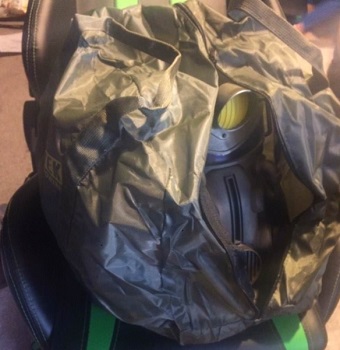 So cheap you can’t find it at WalMart

The answer from Bethesda was that the canvas bags were too expensive to make.  Syncaine covers this point quite well.  The only people who wanted the bag were super fans, the ones that will be there no matter what.  They are the last people you want to piss off.  Imagine a US football game where face paint was banned from the stadium.

They then offered $5 of in-game credit (not enough to buy the virtual version of the bag) and expected that to be enough.  This is when the class action lawsuits were being formed, and frankly there was a decent chance the players would win.  Would be fairly easy to show that Bethesda knew a long time ago that canvas bags were not possible, yet they were still advertising them even after launch.  So now they are making canvas bags and letting people place tickets to get them.

And just last night, the ticketing system in Bethesda decided to make life ultra fun by granting access to players to the overall database.  There are two interesting laws that apply here.  GDPR is one, and that has a fine of up to 5% of worldwide revenue as it relates to data breaches.  The other is a very recent California law that states that if 500 people from that state are impacted, the company must advise all their users of the data breach.  This is why we’ve seen a fair amount of breaches in the news these past few weeks.

If this was satire, then Bethesda would get the all-time trophy for trolling.  It’s a real masterclass.

If it isn’t, then Bethesda managed something impressive:

As a case study, it will be hard to find someone else who can do this much damage to their brand in such a small amount of time.  All of it self-inflicted.  I wonder what the long-term impacts will be on the company, and just gaming as a whole.  Maybe this is enough of a crater of bad things that practices change.

One thought on “Bethesda”