Long form aside, here’s a quick list of weekend achievements, first in WoW

There are really 2 parts to this.  The Monk and the DK.

Most of the Monk’s time has been on the Broken Shores and the main quest line.  There’s a dozen or so steps required, and they cover pretty much everything the zone has to offer.  I think it’s a really solid way to make people try everything out once, and see what clicks.

Flying is unlocked through reputation – and the main source is the main quest line.  Some of those steps are a bit more painful (waiting on a class hall quest), a bit more grindy (Sentinax marks), or even a bit luck based (killing 3 rares when none are up).  The last step was finishing 6 world quests.  I only saw 5, then remembered I hid pet quests.  Did that and the screen lit up.  Flying ahoy!

The better news was that I was 2 small quests away from the class mount.  Monks get Ban-Lu.  Here’s a neat art piece on the cat.  Oddly this is pretty much how my tanky Monk looks. 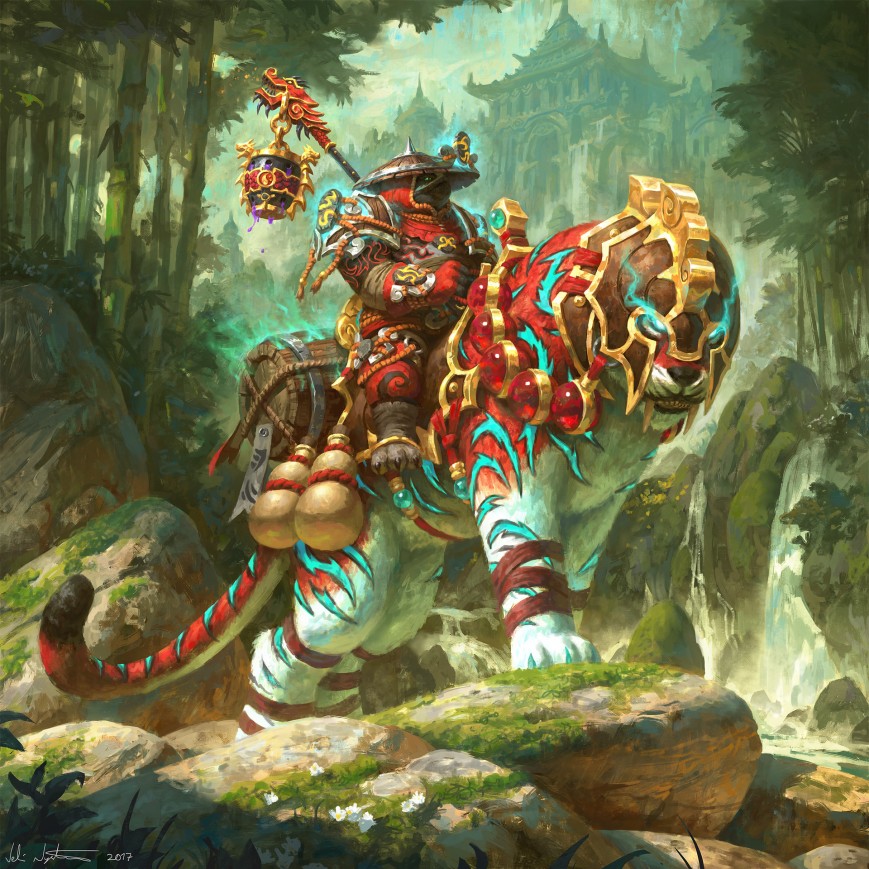 Every other class needs to do 2 things.  Finish their class hall quest (which is a week’s worth of effort due to the timed missions) and do the Broken Shores quest line (a couple days’ worth).  DH may do it since the mount is neat looking.  Rogue and Paladin… nope.  Devs – note for you.  Paladins and Warlocks have had enough horses that are golden/green.

Heirloom gear is supposed to give more experience.  As per above, I have already leveled 4 characters to 110.  I think only the Rogue did so on rested experience.  All of them hit 110 by the 4th zone, though at different points.

The DK hit 110 on the 4th zone – though only 10 or so quests in.  Just before completing the southern part of the map.  I did not see the experience gains from heirlooms here.  The stat boosts are nice though and makes the gear/stat cliff at 110 more bearable.  Now it’s about picking the right world quests to get him up to 850-875.

What did save time was flying.  I decided to focus on that with the Monk before doing any questing after hitting 100.  While each level too the same amount of quests/experience, each of those levels was extremely fast.  The longest was 30 minutes and that was mostly due to 2 bonus quests that gave pithily advancement but large exp boosts.  The main speed boost was flying.  It cuts leveling time by 75%.

Now I’m stuck on a dungeon quest for the DK, a run through Nethalrion’s Lair.  And since I hit 110, I collected 3 pieces of artifact knowledge that were around 3 billion each.  So all the traits are unlocked on all 3 specs.  I don’t have any decent relics, but it’s something.  Time for some world quests.

Similar vein of thought here… WoW had a long history of being alt-friendly.  Leveling was a joke after the first few runs – heirlooms did all the work.  Getting to level cap was easy enough, then a few days of dungeon runs put you in a decent spot.  At least up until MoP.  WoD, garrisons and the rep grind did it in for me for alts.  Legion pulls back a bit on that, with the dramatic exception of the artifact weapon – in particular the power and time gates.  That’s been reverted now (AK is shared on an account, time gates on 3rd relics are gone, empowerment is gone).

Given that the focus for BfA seems to be a reversion of the “bring the player” mentality, with a renewed focus on class distinction, that probably means people are going to have more alts.  The leveling portion is one thing, but it’s the cap-level activities that will need to be balanced.

I’ll go back to my old recommendation with MoP – make proving grounds mandatory for each class.  Continue to have unlocks/achievements, but base those on the account – not the character.  To figure out if that alt can take on extra content, just put them in the proving grounds.  It’s not time locked, takes about 20 minutes to reach gold rank, and is a great way to figure out how class mechanics work.