It took quite a few days, but I was able to run the necessary Covert Ops (3 of them) to unlock the final base for the Chosen Assassin.  I find her to be the most annoying, since Overwatch doesn’t work on her, she has tremendous movement speed, decent damage, and can return to stealth.  So target #1.

I made sure all my top tier folk were rested, nothing was on fire, and that I had my best gear on – including mods for free reloads. That last part was the single best move I planned.  Spoilers below… I guess.

The base itself is two parts.  The first one is more storage/lab than much else.  A futuristic base, with a solid chunk of enemy pods, split into various rooms.  There doesn’t appear to be any patrols, but there are obstacles all over the place.  There was no timer, so I used my stealth members to lead the pack and ensure ambushes were setup where needed.

That worked pretty well for the most part.  Advent forces, Viper, Codex… they all went down due to surprise attacks and well placed grenades.  Then I reached the last room.

This thing had 3 Mutons and an Andromedon.  Mutons I can deal with, but the Andromedon… jeez I dislike these guys.  Massive hit point pools, then they come back from the dead with as much HP.  This means you want to avoid an overkill the first time, since that damage is wasted.  More grenades, room explosions, and a chunk of cooldown skills to clear that out, but with injuries.

I am glad that I took a few extra turns after this fight to reset my cooldowns, as when you take the “elevator” to the next room, nothing resets.   Grenades and single-use skills did not reset.  Anyhoo, the first part was an ok challenge, but since none of the alien pods worked together, it was an easy enough go.

Boss Room.  This was much smaller than I had anticipated.  What you see int eh screenshot below is about half the map.  Those 3 rows make up most of it, with 4 raised areas (two in the screen on bottom left and top right), as well as a large platform to the top left. 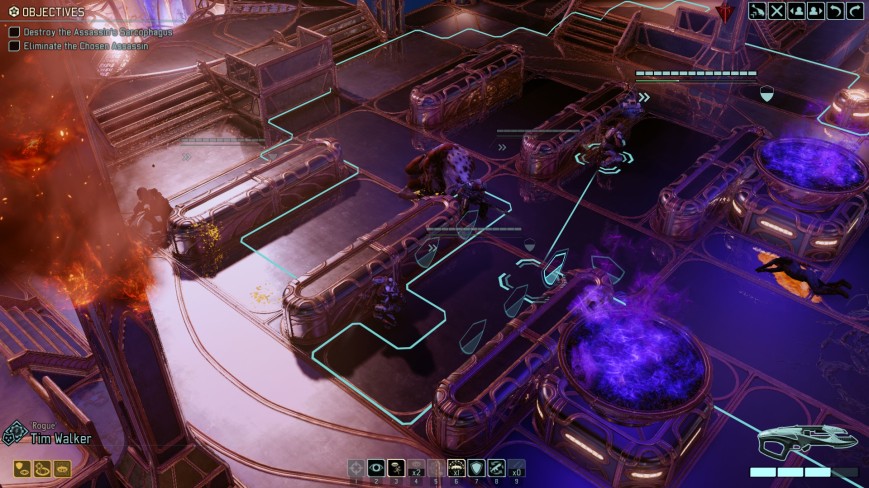 The fight starts off with 2 random enemies just standing around.  Get close enough and they trigger the Chosen to enter the fight.  Chosen alone are a pain, and there’s so much stuff for people to hide around… shots are not guaranteed.

I do manage to take her down, with some smart placement of the Templar for damage immunity, and I’m thinking I’m good.  I figure it was on-par with the previous floor in difficulty.  I was incorrect.

Each Chosen has a sarcophagus on the large platform.  They are not targetteable until the Chosen is take down. They have an insane amount of hit points, cannot be crit, and heal the Chosen a set amount each turn.  When that counter reaches 100%, the Chosen comes back, and the sarcophagus is immune again.

Did I mention that while this is happening, 2 random enemies will zone in, on the 4 platforms in the corners of the room?  Random.  I went back and checked.  You could get Advent soldiers.  Maybe some Sectoids.  Berserkers too.  Or, in really bad cases, multiple Codex (Codices?).  Yeah, I had bad luck.

If they are low HP enemies, then it takes 1 soldier to take them out.  Some are tougher and need a couple, plus the actual movement across the map.  This is where those free reloads came in super useful.  The downside is that this also means really close quarters for the squad – ideal for grenade/storm use.  Which I had.

I used everything I had left.  Mimic beacon.  Claymore.  A skulljack.  Stun attacks (which are awesome, since they prevent a respawn).  It took 3 cycles, but I ended up taking down the sarcophagus.  A few more shots and the Assassin was down.  It was a nearly 2 hour mission.

The really great part here is that once those 2 parts are done, the mission is over.  Regardless of how many other aliens are on the map.  I finished with 3 Codex on the map, half the squad below 1/2 HP, 2 that had been dazed, one blinded…return to the base has the entire squad out of commission for nearly 20 days.

But the Assassin is gone, so I have that going for me.

So some key tips