One of the more interesting aspects of strategic RPGs is the character growth… and XCOM is no slouch in this matter.  My end-game sniper from my last playthrough could take out an entire 6 man rookie squad solo.  Going from that mindset, to starting fresh, well it’s quite jarring.

The last mission I did involved most of the new mechanics (rebels, chosen, bonds, new skills, mission types, research boosts), but this post will only focus on the Lost portion.  The mission started with me splitting my 4 man team into 2s, then doing two separate maps with a guest character to add to the team, each.  Once those maps were done, both teams joined up for the next mission.

The Lost are a zombie-like faction, with low hit points, but they attack in a swarm of 3-6 at once. 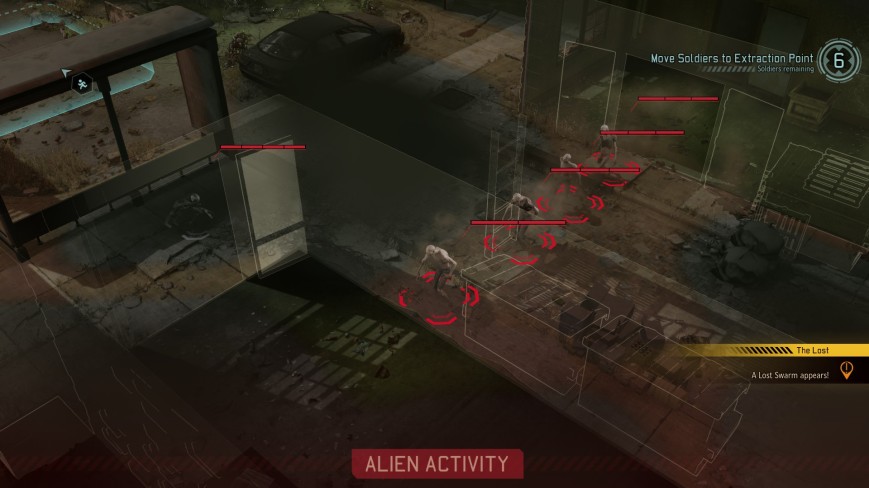 1 of 4 swarms this mission

The neat feature here is that if you successfully kill one you get a free action back.  That’s useful when you have a rather large squad, with solid aim and a lot of ammo.  I have very little of that at the start of the game.  Aside from one guest character (sniper) everyone is at 60-70% aim chance, even at point blank.  Those aren’t exactly top odds.  And grenadiers only have 3 ammo –  another resource that needs to be managed.

The good news is that I have grenades.  Lots of grenades.  And each does enough damage to take out a Lost, but I don’t get the action point back.  Choices.

I forgot to mention that Lost are attracted to noise, so the more noise you make, the more swarms come towards you.  Even more fun.

All told, I killed a few dozen enemies in that set of maps.  Thankfully it was all Lost and no other types.  A solid mix would have made it a pile of pain.  It was certainly an entertaining set of mechanics, feeling more like “horde mode” from other games.  I’m quite curious how that will work out in later missions, where ammo isn’t so scarce, and my aim% is much, much higher.