In Horizon, Cauldrons are these mini-puzzle areas that you need to navigate in order to unlock the ability to “convert” larger robots to fight for you.  They follow a general pattern.

The front door and last boss are the real challenges, mostly because you’ve probably never encountered that particular set of enemies before.  I don’t consider it spoilers to say that the enemy on the cover of the box is one of those bosses.

The Thunderjaw is impressive.  It’s pretty much a mechanical T-Rex, but with lasers, a mine launcher, fire breath and super speed.  Feels like I’m fighting Grimlock. 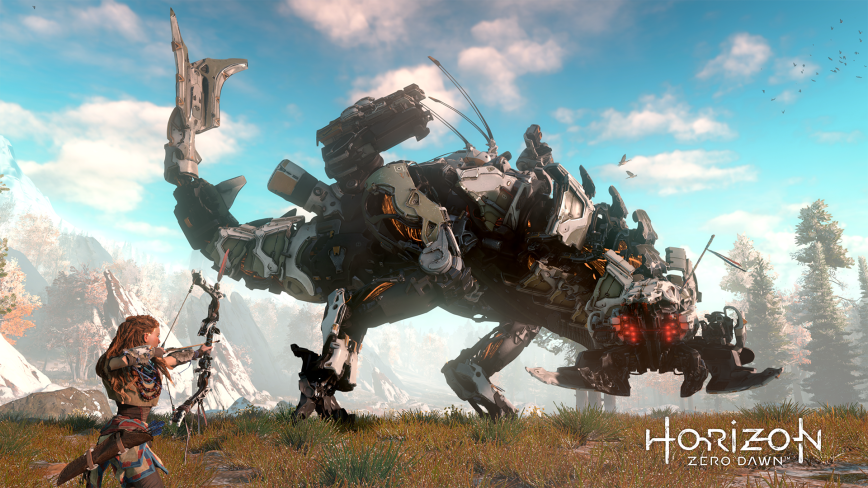 This particular fight took about 40 minutes.  The successful run was under 2.

I have a particular arrow that is quite effective at shedding enemy armor and equipment.  The Thunderjaw has multiple things to remove.  2 mine launchers, radar, protective heart panels, shock panels, heat panels, 2 lasers beams on his head, his tail that takes 90% of your health, and finally his head protection.  When you take off a piece, the enemy changes strategies to attack you.  At first, he’s likely to stay at range and attack, but when you take those tools away, he charges non-stop and swings his tail.  Take the tail away and he seems to enrage.

I stripped every piece off the guy and that only dropped him to about 75% HP.  I threw hundreds of arrows into his weak spots, barely a dent.  I could never get his shock or fire canisters to explode, no matter how much I shot them.  Add to the fact that every physical hit I took was 75-90% of my HP pool, I was barely scrapping by with rolls everywhere.

Remember that camera issue from before?  Well a giant T-Rex that’s charging at you, and that you can’t see, that’s not much fun.

After more than 20 attempts, I decided to change strategies.  Some of the pieces that are knocked off can be used – in particular the min launchers.  The downside is that it takes forever to pick up the item and you move like molasses when you have it.  I took a practice run to figure out that – ah to hell with planning.

I died, and the next go, I simply shot off the launcher and stood next to it.  When he charged, I rolled, picked up the launcher, turned on slow-mo-mode, and shot the entire clip into the bugger.  I repeated the same steps with the other launcher.  I didn’t take a single hit.  It almost felt like a staged run.

I went from feeling like I was going to throw the controller in frustration to a perfect run.  There’s a certain feeling of euphoria that comes from those types of events. Having to keep trying different things until it just clicks. It’s moments like those that clearly show why I like games.  I’m going to remember this particular gaming event for a long time…