First, I liked the previous game, Pillars of Eternity.  It was in the vein of Baldur’s Gate, with the same difficulty challenge and bugs/features.  Some things worked well, others were less fun.  The dragon at the bottom of the tower was one such thing, where it took 2 days to beat, and with ample amounts of cheese. 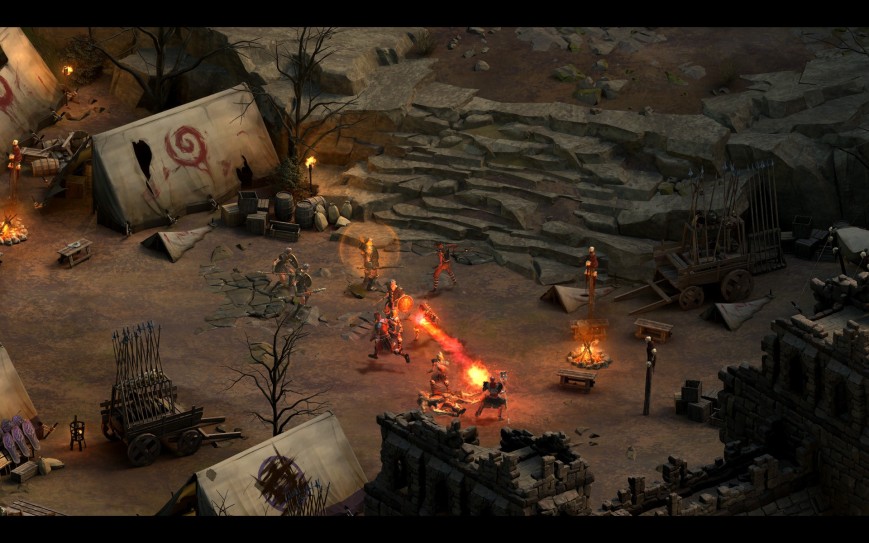 Tyranny uses that engine as the foundation, then lays a new RPG game on top.

Instead of a combat-heavy game, Tyranny is more akin to a choose-your-own-adventure.  It is incredibly text heavy, though each on-screen message has links within to add extra context.  Choices matter, and you gain favor/wrath based on it.  This may close out entire quest paths, or provide alternate solutions.  And that choice is consistent throughout, with each map offering at least one of these decisions per.  It certainly makes you feel more invested in the story, as you’re a part of it, rather than an on-rails approach in most other games (Final Fantasy).

A further change is the overall plot of the game.  This is no hero’s journey.  You play an adjudicator for an immortal tyrant, in the final throws of a campaign to conquer the continent.  You’re thrown between 2 supporting factions, with wildly differing approaches to life (order vs chaos) and eventually need to pick a side.  None of the sides are nice.  Even the rebels you’re attacking aren’t nice in the traditional sense. So each and every decision you make is either the lesser of two evils, or a completely pragmatic one.

For example one quick conversation had me adjudicate a deserter from one faction trying to gain acceptance into another.  The one doing the running saw that it was a better deal on the other side.  The one accepting had strict rules to join, and even more strict rules on deserters.  The options were either to let either side “win”, outright execute the deserter, or subject them to a live of slavery.  The “win” options were not viable to my character plan, plus it would have pissed off the opposite side something fierce.  I opted for slavery, to which the deserter was actually happy as an outcome.

The main judge in all this is a character called Tunon.  An extremely pragmatic character, with a penchant for the long game.  Two people argue in front of him, one wins but rarely in the fashion they thought.  Which in fact is a smart thing, as it forces people to resolve their issues outside of court, as no one really wins but someone ends up losing big time.

Suffice it to say, that the writing is very well done, and the characters are much more than just posters.  There is purpose.

Mechanically the game is fairly sound.  It’s a mix of PoE,Dragon Age, and Elder Scrolls. You have a 4 person party to play with, though by the 5 hour mark I had 3 more in the wings.  You start off with the traditional tank/dps/healer folks, then get some interesting additions.  Again, there’s a bard-like player who uses song to help in combat.  You can issue commands in real- or stop-time, and health pools are inflated enough that combat isn’t over in 3 hits.  Group combat is common, and some strategic planning is required so that people don’t get knocked down.

Getting knocked down introduces wounds to the player, which can stack.  A 10% hit to stats may not seem like much, but compounded it makes a large difference.  Rest is the only way to cure the status.

Magic, melee, stats and whatnot are still there.  There are fewer equipment slots, which is good.  You can craft your own spells, for more damage, range, effects – each increasing the Lore requirement to cast.  Mana doesn’t exist, just cooldowns on spells and skills, stopping you from chaining the same attack.  Reducing that cooldown is a big deal.

Stat themselves are interesting. You have the basic attributes that impact damage, health, crit and the regular stuff.  Then you have the combat skills and tertiary skills.  Swing a two-hander, get better at two-handed weapons.  Cast fire spells, get better at fire spells.  Pick locks, get better at Subterfuge.  And these skills are used in more than combat – it could be climbing a wall, intimidating someone, or finding a secret.  It all works.

I’m not terribly far into the game, under 10 hours.  I’ve had a few head scratchers where I wanted to find a better way out of a situation.  I’ve had combat go terribly poorly, until I seriously rethought my combat approach.  I’ve encountered few things I’d consider a bug, though I did find an odd dead end without much reason behind it.

The sound and art click for me.  The voice acting is relatively well done.  I get the feeling I’m in another world, which is essential for any RPG.  I like that my reputation precedes me, and that for good or ill, I don’t have to rebuild things in every new town.

It’s certainly an iterative take on the classic RPG, one that I think works better for the risks taken.  I strongly recommend picking up a copy.  It’s a rare thing where we get indie companies that can make such strong gaming statements – and we should be supporting that as much as possible.