The vacation I took was really quite good.  Being disconnected for a solid week from work and the ‘net really does wonders.  I’m just the right age where the internet was starting to pick up steam while I was a teen, so I clearly remember a time without it.  A week on a cruise ship, staring at the sea, that’s very close to being a teen sitting on porch or at a park doing nothing.  Maybe cathartic.

The downside was that when I got back into the office there were some rather large fires that needed to be put out and that took most of the first week.  It also meant that I wasn’t able to catch up or do work for that time and only last week was I finally able to close a month’s work of work proper.  Top that off with a complete restructure in the organization and it’s making for an interesting time.

An interesting anecdote here.  When my flight landed back home, I needed to make a call to sort some things.  My phone also gives me access to work email.  Anyhoot, I turn the phone on and do the work, but all the while it’s synchronizing with work and personal mail.  It reaches a decent number, somewhere near 200 and I thought it was done.  Well, that was just the personal side, because the work emails blew it out of the water.   Seeing that number grow and grow and grow, it was both fascinating and worrisome, since I knew I’d have to clean it up.

So back to work, back to life and hopefully back to blogging too! 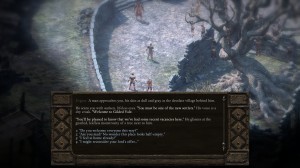 This is really the only game I need to be talking about.  I played the crap out of all of Black Isle’s games, capping well over 200 hours in BG2.  Heck, it might even be more.  I own the BG remake on Android too, so the comparison between the Infinity Engine games and PoE is simple to make.

Gone are the D&D rulesets that were more hindrance than bonus.  In it’s place is a custom ruleset based on a D20 model but actually supports active combat.  The most important improvement for me is the casting/action bar, letting you know when an action will take place, making it miles easier to queue actions and movement.  Stats are a close second, where scumming just doesn’t make sense.  A warrior and a wizard may have the exact same stats, since they are not class specific.  For example, Might increases all damage and all healing.  Intelligence increase the AE and duration.  Constitution is HP and resists.  It’s smart and makes you want to spread the stats around a bit.

Where in the past, Wizards (and their kin) were always seen as the strongest bunch, that is not the case here.  There’s a limit of on the number of times you can rest in the wild and the Wizard takes a big hit here for it.  That’s compared to the Cipher who has skills used every combat that deal as much damage and cause as much disorder.  The Chanter isn’t too far behind with extremely powerful buffs/debuffs for the entire group, just like a Bard, and all passive to boot.  I made a monk (as my BG2 ultimate character was a monk) and I was pleasantly surprised at the power within.  It needs to take damage to survive but that happened most often.  A warrior with a shield is a sight to see mind you, Eder was practically immortal on my playthrough.

Combat itself varies from ho hum to crazy intensity.  There were multiple battles where I got squashed due to poor planning and execution.  There was only 1 fight where I was simply cheesed by the game, and that’s the optional dungeon final boss – the adra dragon.  At max level, with the best gear and skills I could find, he 1 shot the entire group (minus the tank) a bunch of times.  I spent 2 night trying to take him out “clean” but ended up using a petrification trap, a Chant for reload speed, damage buffs and 6x arbalests/guns to take him out.  Dead in 10 seconds.  The rest of the battles, for all their crazyness, were pretty darn fun.

I do have to mention the writing.  It is superb.  Each character is very well flushed out, with a unique point of view on the game.  Eder is wracked with guilt and questions about his brother, Aloth is going slowly insane, Kana is searching for a lost civilization, Durance redemption…The bad guy is also sympathetic in his own way, just like older games.  There are very few black and white decisions here, and there are ripple effects on your reputation across the game world.  Each person’s opinion adds more flavor and keeps the game very interesting.  Even the finale twist (there’s always a twist) is well executed.  A nice touch at the end is a Fallout-like storyboard of what your actions had as a consequence on the world.  I’ll take a few weeks off then make another run I’m sure.