Sick + holidays = no posts.  Pretty sure the holidays are supposed to be a break but it seems like they are more hectic each year.  The saving grace is watching the kids have a blast, reminding me why we bother in the first place.

Making it just under the wire, I wanted to give a list of my favorite games of the year.  The vast majority of my games are PC.  Steam + big screen + controller = much better experience.  I look at the new consoles and while they look cool, other than exclusive games, my laptop is more powerful, has more space and thousands of more games.

On to the list!  Of note, these are only games I played.  Last of Us would likely be on it but I didn’t get a chance to play as EBGames ran out of copies.

The only console game on my list but this is why consoles are sold.  A solid exclusive game, with amazing art (Studio Ghibli!), great RPG mechanics and a deep set story.  It seems more of a kid game, and perhaps for the first 45 minutes it is.  Then you hit the first Nightmare boss and realize, ok, this is for adults.  I put in nearly 50 hours and didn’t complete everything.  I’ve recently restarted a session, for when I’m sent to the basement.

This is the way western F2P MMOs need to play.  More of an action game really, in the vein of DCUO, but with a fair amount more customization.  Leveling is smooth, talent trees make sense, limited active skills ensures people think before moving out, offline crafting, decent F2P mechanics, decent social tools and a dungeon crafting tool (Foundry) are just a few of the reasons everyone should give this game a try.

I’ve gone on enough about this game already.  It is the first true MMO game since Rift 3 years ago.  It’s also the only successful subscription MMO in a long time.  Classes have roles, there’s little overlap (since one character can level every class), crafting is complex, the market is well thought out and combat is extremely engaging and challenging.  It makes social interactions much more important.  The success of the game is contrasted by where the game came from, what with FF14 originally being the worst launched game in memory.  The game was on the up and up, then patch 2.1 hit for player housing and developers taking an odd stance on pricing.  Still, it’s a very solid game.

While it launched missing a fair amount of content, by the end of the summer the game was complete.  It’s a rather amazingly addictive game, with the spirit of what Diablo 3 should have given us.  Crafting is wonky (it is in every game of this type) but the combat is solid and the powers interesting.  Customization, visually, is lacking if you don’t pony up the cash but since this IP is so restricted, it makes sense.  A solid F2P endeavor and hopefully makes room for others.

When you look at the image above, does it not scream Diablo 2?  Path of Exile is an extremely complex action RPG like Diablo.  The skill tree alone has over 1000 choices.  The really neat part is the crafting/trading experience.  Gold farmers can’t make a dime since the entire game is around a system of bartering.  It makes trades much more important.  The crafting game is also super complex and fun, with random affixes and bonuses.  You can make a level 1 item better than a level 50 item, with the right rolls.  A great game to try out.  The game is finally out of beta, hence it’s on the list.

Ok, this game just rocks.  The first play through is a pile of fun, with some neat twists, especially at the end.  The best part is playing a second time and realizing that the entire story is thought out and integrated.  What seems like a simple scene to just start off the game is actually a deep examination of causation.  My only critique here is the dependence on combat/weapons rather than the exploratory experience of the first two games.  This is offset to a large amount by the writing and acting, and the feeling that Elizabeth and Booker have something together. 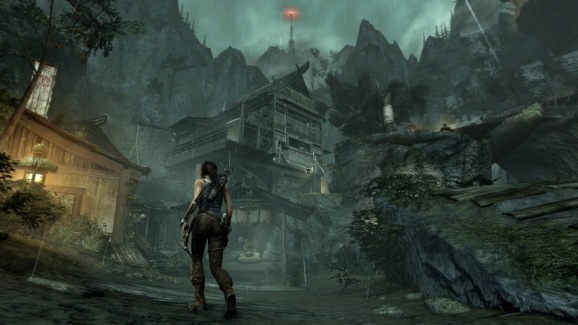 This list wouldn’t be complete with the resurgence of a dying franchise.  Tomb Raider brought back Lara, in a prequel no less.  It made bows cool again.  The entire game is an exercise in patience, planning and then running away.  There’s a solid pace, a decent storyline and great art.  I played this one a few times through, getting 100% on the first shot and something like 80% on the second.  It’s a solid game.

That’s my list for 2013.  Pretty bad for MMOs (except FF14) but really strong on the RPG/story front.  If you add some more games that I didn’t have the chance to play, exclude GTA5 (which is ok but not great), there’s a lot of hope for gaming in the future. Developers are realizing that solid mechanics are important but personal experience even more today.  Looking forward to 2014!