I’ve heard some good things about FF14 and Rohan’s recent review just pushed me over the edge.  Here follows the tale of my trip to level 9.

First we need to get the game.  There’s no trial option, just a very poorly designed web site.   It could just be me, but advertising a sale from August 27th doesn’t inspire confidence. The pricing scheme for the game is also quite confusing.  Finally, the entire Square Enix account management portion is just… odd.  I need an account to buy something, fine.  I have one related to FF7.  I try that out (with a password reset) and that works fine-ish.  For some reason, my Cart gets uploaded with 3 more games, 2 of which are physical copies.  A few changes later and I have the instructions to move forward.  And the fun is just starting!

8 gig download later (that is so much smaller than I expected) and we’re raring to go!

Character creation is ok enough.  5 races, minimal customization.  Or at least, the customization are so minor given gear covers up so much.  It’s more than WoW but a lot less than other game of late.  It looks good though!  What is extremely odd is the class descriptions.  If you check the image below, let me know what you think this class does.

He’s essentially a healer.  You’d know this from the cut-off button that shows what the character looks like in class gear.  Well actually, you’d only know that if you were a FF fan in the first place as you’re in white robes.  Now, in game you can swap classes but for a starting point, it’s very confusing.

Next steps is the tutorial of sorts.  I think I spent an hour before actually using an attack skill, which is both  unique and single-player-ish.  I start in Gridania, a 2-zone town and get to run errands.  After SWTOR, it’s odd to have quests without voices.  It seems eerily silent.  There are a lot of people in the world and there are few empty places.  That’s great!  Everything looks great too.  I think I’m level 3 by the time I get to attack something and on the first kill, hit level 4.

Combat, as many have pointed out, has a 2.5s cooldown between skills.  This is just over double what many games are bringing to the table today and I really like it.  The game slows down and you get to think about next steps rather than just smash buttons.  Skills are fluid and fun but sparse.  By level 10 I still only have 2 attack skills, but 2 heals and a  shield.  Compared to other games skill bloat issues, this is refreshing.  Reminds me a little bit of Neverwinter. 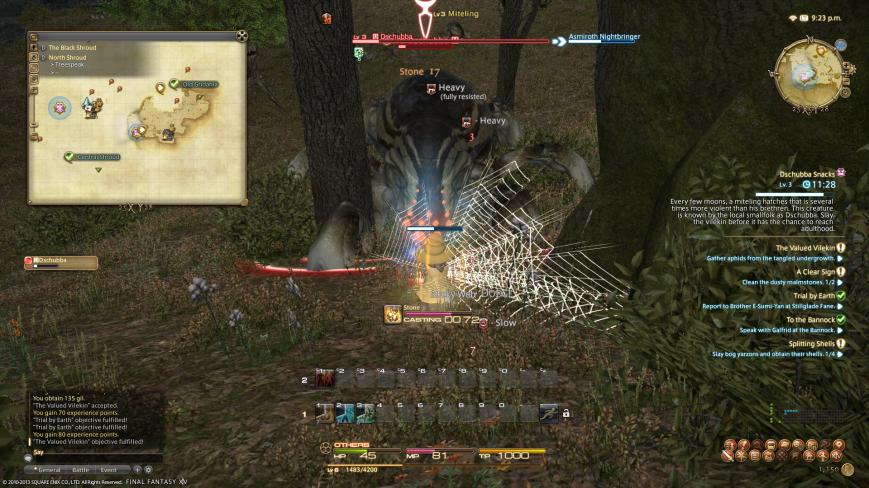 This one shows combat at level 6 against a FATE event (open world event a-la Public Quests in WAR, RIFTs in RIFT and events in GW2).  Fates are all over the place, which really makes me think they are just open quests that people can jump in on.  Quests are your typical kill/fetch variety but of interesting note, it’s all auto-looted and apparently 100% quest drops.  I miss seeing stuff to pick up and have yet to get any equipment from drops.  Small things but if you remove loot from anything but quests/crafting, it really changes the way you view loot.  I can’t say I miss it, just feels odd.

By the time I logged off I was level 9 and 3 hours in, with some small parts of zones done.  I still don’t understand travel, crafting (apparently I can only learn it in another capital), cross-class skills, swapping classes and a wide slew of other questions.  It’s like there’s going to be some magic number I’ll reach and then discover it.

Pace-wise the game is slow, which is relaxing.  I can move fluidly between events and there is the impression of a carrot on that stick.  It is really jarring to go back to another game and see the sheer speed of everything.  It’s a completely different design decision, a conscious one, and one that feels properly implemented.

I am missing the need for social interactions so far and the toolsets provided are very poor. I’ll make stronger efforts in that regard in the next session.  So far though, impressions are above expectations.