Cryptic and I have a strange relationship.  I’ve played all of their games and wrote guides for most of them.  The last one out the door, Star Trek Online, was a massive rush-job which essentially destroyed the company’s viability without outside help.  Perfect World came about, and now the F2P model is all they care about.  Many have mentioned this in the past but a F2P game that isn’t designed from the start to be F2P is usually horrible.  This is the main reason I wanted to give Neverwinter a shake, to see what a “start-to-finish” F2P game plays.  And to be honest, I like what I see. 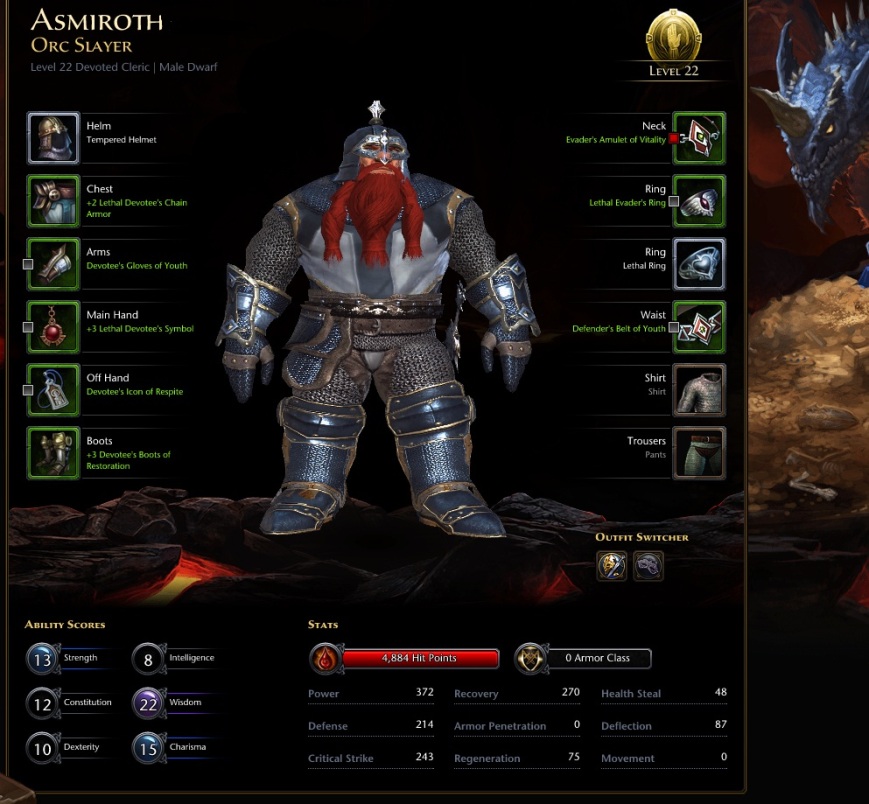 First and most important, Neverwinter is in open beta/soft launch.  I mention this here so that people aren’t surprised when the server goes down for 4 hours for no reason one evening.  It would seem there’s significant downtime every other day, though it’s getting better.  If you want the full experience, don’t worry about waiting a bit.

Classes are a simple affair.  Tank, Healer, Range, Quick Melee, Strong Melee.  Each can play solo, though some fights will require solid use of game mechanics to get through.  I went the Healer  route (Devoted Cleric).  From my experience in the game so far, classes seem rather spread out.  Creating a character is a matter of selecting your race (for minor bonuses), rolling your stats (from a pre-generated list of about 10 choices) and customizing your character.  The customization is fun, if simple.  I mean, a Tiefling can only ever look red with horns, so you’re going to be limited.  I do wish the sliders for size had a larger effect though, it’s hard to see the difference between no waist and full waist.  Next up, is a quick tutorial.

Which I love by the way.  Fully voiced, good pacing.  Easy to zoom through on the 2nd+ character.  No matter what you do, by the end you’re level 4 and have 1 of every skill unlocked.

The skill portion is where 4th edition D&D is supposed to come through and I guess it sort of does.  The concept of always available, sometimes available and rarely available is here, true, but the speed at which these becomes available is odd – especially when you put in the skill toggle.  At-will maps to the 2 mouse buttons and you spam the crud out of it.  Encounter skills have a 15s recharge (or close enough) and do more – AE heal, piercing attack, AE attack, etc…  Daily skills need power, which is generated from using the previous 2 types of skills.  Once you have enough, you can use a super-power of sorts.  One of mine had an angle fall from the sky, or a giant fire pillar.  It’s cool effects but you want to use them for tough enemies.  All of these skills can get unlocked or upgraded manually as you level.  It gives you some choice to specialize.  You can only ever have a maximum 2 At-Will, 3 Encounter and 2 Daily powers available for combat though, so choose wisely.  The final item is a skill toggle.  At level 15 you get this unlock that fills a bar on the middle-left of the screen.  Toggle with Tab and your At-Wills change to something deadlier and you other powers get upgraded while you have charge to use.  It’s like a super meter from fighting games, and makes combat that much more fun.

Combat is targeted with mouse-look, which is a welcome change from most games.  It uses an intelligent healing mechanic, which is good.  In a mass of enemies though, it can be hard to target a single one consistently.  It does make line of sight that much more important for PvP though, which is great.  There’s also a system of “tells” where a red spot appears on the ground and within a second or two, a spike of damage occurs.  You can move out of it but you have to wait for your combat animation to end.  Takes getting used to but you can avoid most damage that way.  You eventually get a companion to travel with you, which is great.  Same basic classes – tank, healer, range and melee.  The tank does an amazing job.  They level with you too, so that’s good.

Next up is the “what is there do to?” question.  Well, there’s a core quest line that can run you through the levels.  The Foundry provides player-generated quests that are a lot of fun to run through – but some bugs with how the game (not the quests themselves) runs can make some of them difficult to finish.  The rest is supplemented with skirmishes (5 of you fighting waves of enemies for ~10 minutes), dungeons (5 of you running a dungeon for ~30-45 minutes), PvP combat (arena-like), crafting (1 for experience, 4 for the armor type your class uses) and the auction house.  A cool feature is that every hour, for an hour, a random event occurs with extra bonuses for players.  So if Skirmishes are on deck, then the queue for running them seems to drop to a fraction of other times.  Skirmishes are quick-paced shooting galleries.  Dungeons are pretty cool and do require more than just aiming for the big guy.  This isn’t WoW’s AE fest.  All bosses seem to summon more enemies during the fight and as a healer, I spend the last 2 minutes running around healing myself, hoping for help.

There are currently 3 servers, soon to be merged into one.  The game is heavily instanced, so it really doesn’t make a difference in the end.  It does make it harder to find another player a 2nd time, compared to “sharded” game, but it does make everyone play in the same pot.  I kind of like it. 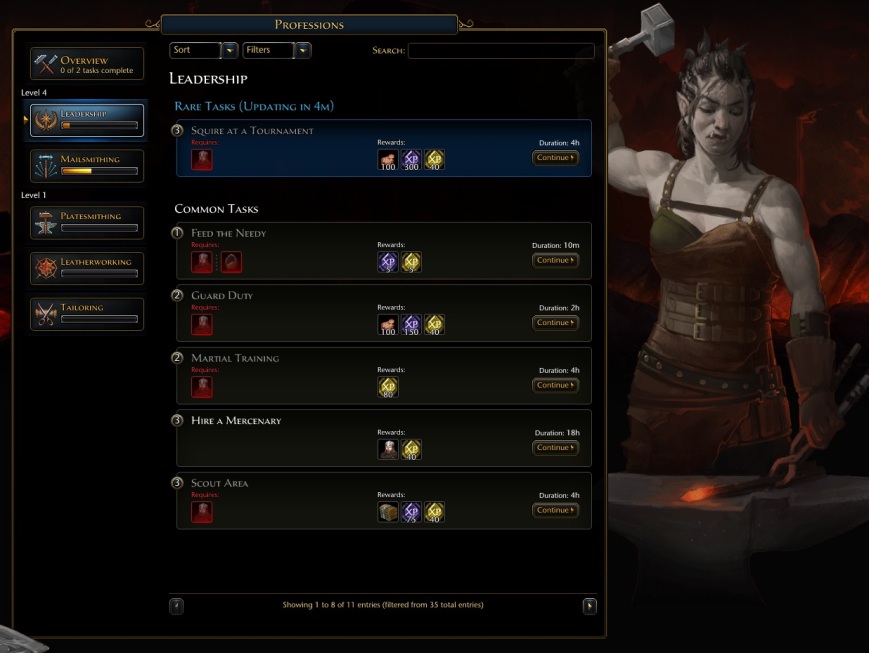 Another cool part of the game is the Gateway online service.  Think WoW Armory + more. You can view your character, full access to the auction house, full access to crafting, guild panel and access to mail.  Up and down more than I’d like, but again, BETA.  It makes you wonder how any game can launch today without an off-line component.  I tend to queue items for a couple hours, then check back a few times a day to restart.  It’s great.

The F2P portion is where people might find issue.  There are 3 currencies – gold, astral diamonds and zen.  The first is in-game and used to buy most items.  By level 20 I had 1 gold.  I like that it’s hard to come by.  Astral diamonds are acquired from specific in-game tasks/rewards or can be refined from rough diamonds acquired from similar means.  You can only refine 24,000 diamonds a day.  That seems a lot, I’m sure, but some items are worth 2,000,000 diamonds – a hefty sum.  Diamonds are used primarily for the Auction House but also to speed up certain activities.  Zen is the Perfect World currency bought with real-world dollars.  You can buy diamonds with it (or vice-versa with free trade) or buy a slew of character customization options with it – respecs, mounts, extra characters, etc…  After 22 levels, I’ve had no need for either Diamonds or Zen.  I’m guessing that will change in a few levels.  I really don’t mind dropping a few bucks here and there if I’m having fun.

Neverwinter scratches an itch for simple gameplay in short bursts.  It doesn’t have depth but doesn’t pretend to either and you’re not paying for it.  I think there real beauty here is going to be the Foundry, once it’s fully up and running.  Maybe we’ll get to see group content in there too.  It’s well worth the shot and gives some needed competition in an admittedly clone-friendly market.