After numerous recommendations and a good price point, I finally picked this one up.  StS is in essence a rogue like card game.  It’s still in Early Access, so there are certainly some new things to come along.  It’s a solid game. 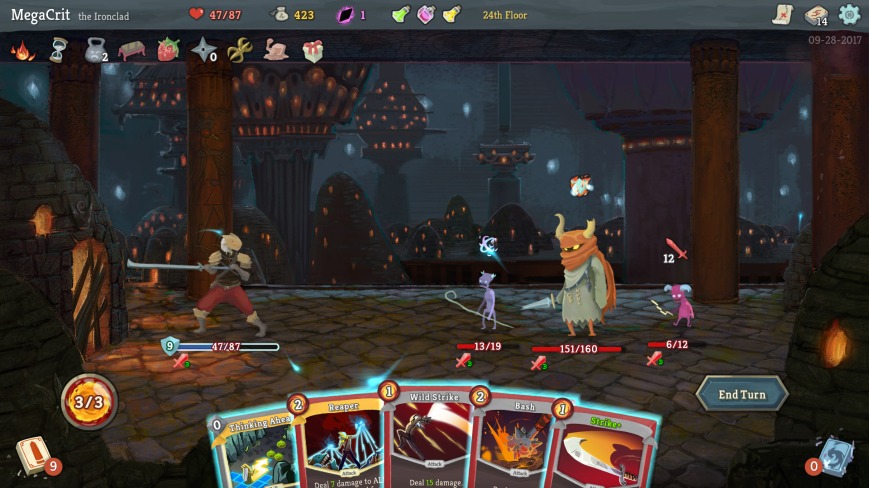 Merging of genres is always tough.  It’s really hard to get the best of both worlds, since at some point you need to compromise.  Deck building games are about a combination of control and randomness, where player skill is more about knowing which card to play when (and which to add to the deck as well).  Rogues are often luck based, but the best one have an underlying incremental approach where not only do you get better (smarter) but the characters themselves improve.  StS gets really close to both.

I will throw in that I generally enjoy rogue-likes.  Faster than Light (FTL) is at the top of my all-time games.  I much prefer short playtimes, where a game over is both earned and recovered from in relatively short order.

Mechanics are simple enough.  3 classes, with similar starting decks.  Ironclad is about outright damage, Silent is about passive cards, Defect is a mage like class with a more complex set up.  You have a set number of action points per turn, play cards that value up to that.  You always attack first.  Different event types and maps where you get to select progress.  Collect more cards for your deck, or collect relics which provide various permanent boosts for your character.

I’m somewhat drawn to the Silent and prefer a Shiv deck.  That build requires specific cards to be successful in terms of damage.  But Silent damage is burst based, and you need to survive until it’s time.  That requires a lot of block cards, which cause deck bloat.  Which I think is the defining mechanic of StS… in nearly all cases it’s about judicious use of defensive cards since healing is so sparse.  Getting to the final boss of a level (there are 4 levels) with only a small bit of health is a quick way to a game over.  Some enemies are just not going to treat you well.

Balancing your needs, making sure you only have cards that will get played, and picking relics (from bosses) that provide a tangible benefit with minimal downside is key.  It gets more and more complex as you move forward.  That’s a lot of fun.

What’s less fun is the inherent nature of rogues and card games where randomness can undo a lot of hard work.  Losing to RNG is part of life, but it’s especially painful after an hour of investment.  Seeing a run fail because of a bad deck pull, or an event that curses you, or just a bad run of enemies is frustrating.  Dying in a rogue like should provide you some larger benefit aside from the game knowledge.  Playing for 90 minutes, getting a set of bad draws, and losing to RNG makes me stop wanting to play.

Each class has 5 unlocks that are achieved through a points-based system.  Do things, get points, unlock things.  These things are additional card types and additional relics.  This causes RNG to spread wider, meaning generally less chances to get the card/relic you want.  It’s pool bloat I guess.   You could be on a path for a specific deck and then be presented with cards that have no value – multiple times.  I’ve found that the runs become harder the more things get unlocked.  That is a weird feeling.  Especially when the starting state never changes.

I’m not quite sure what would help in this situation.  Maybe when you skip a potion/card/relic you get half the value in gold?  Maybe a starting relic that gives more max HP?  Maybe more reward choices every 5 battles or so?  Save states where you start on floor 2/3?  Playing someone else’s hand in a losing scenario?

Not to say that the game isn’t good.  It really is.  Well worth every penny and you’d get hours of gameplay out of it.  I’ve got enough now that I’ll wait until the next content patch.

3 thoughts on “Slay the Spire”