Then I have the series for you! 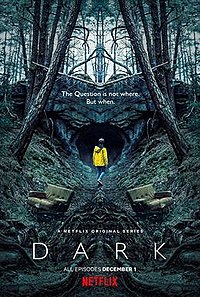 Good sci-fi is the depiction of people coping with life, and the science portion is a tool to help the story go forward.  Dark does a pretty good job with this.

It’s the story of a mysterious town (well more like cave) and how a family/town reacts when kids go missing.  It actually takes a while for that missing part to really get going, as it has a lot of exposure to the very large cast.  By the 3rd episode, you’re given 95% of the bits required to see the entire story.  It may not be obvious when you see something, but in hindsight the story is well structured.

I don’t want to go too much into the plot as that spoils a lot of the fun.  What I can say is that the story is consistent, and the characters actions have impacts.  Given the main sci-fi mechanism used in this story, that had to be in place.

Kids are generally taboo in sci-fi, in that they are pretty much invincible.  Teens, those are fair game.  That 5-10 range… that’s usually the domain of drama, not sci-fi.  That part was both refreshing, and disturbing, since I have not been de-sensitized to it.

There are some tough scenes to watch play out.  Even the people who appear to be evil, are actually trying to make things go forward for the greater good.  Except one guy – he’s a nutter.  Mind you even by the end of the series I still had a lot of questions around him.

The sci-fi part is still well done, and not the enemy of the series.  This is in contrast to Stranger Things 2.  In the first one, the bad guys opened up the upside down.  In the second season, the upside down was the bad guys.  It may seem minor, but that split away from human vs human makes the plot take a different path.  Dark manages to stick to the people factor all the way through.

In the technical realm, the series is quite, you know, dark.  Quite a few night scenes, very little color.  It feels almost dystopian, but then again few people ever seem to smile.  The shots are generally well done, if simple.  There’s next to no CGI.  The music is heavy on the strings, a bit like an orchestral flair for the intense moments.  I think it works.

The weakest point is the voice overs.  The leads are ok, but the supporting cast gets some rough treatment.  I tried watching in German with subtitles and that was less fun.  German seems to demand my attention as an evocative language, and staring down at text makes it hard to concentrate.

Overall, it’s one of the better sci-fi series on Netflix.  It’s entirely consistent, with no real astounding episodes, or weak ones either.  There’s a clear setup for a sequel, but then again, all sci-fi stories finish with a twist.