Murph is watching old movies, I’m watching weird ones.  It so happens to be a genre I rather enjoy – speculative sci-fi.  That is, sci-fi that is just a shade off reality today and in the realm of possible.

Cloverfield Paradox is certainly in that genre, but it suffers for it. 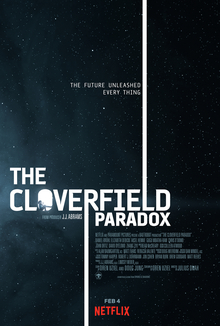 So just for a second, pretend like this has nothing to do with the Cloverfield universe and is instead just a sci-fi movie.  That makes it a lot easier to watch, since you’re not trying to find links (of which there’s solely one, and it makes the movie worse for it).

Actually, let’s first start with the word paradox.  A set of arguments that appear to be conflicting, yet work together.  The chicken and the egg, going back in time and killing your parents… that sort of thing.  It forces some critical thinking and challenges our perception.  There is no paradox in this film, other than a catchy phrase to talk about inter-dimensional travel that has no set of rules to be followed.

The premise is simple enough.  The world is running out of energy, nearing the brink of war, and countries pile together to send a science ship in orbit to build a particle accelerator to generate large amounts of power.  Convoluted perhaps, but workable.

From that point forward, the entire movie is predicated on sci-fi tropes.

Don’t get me wrong, I can live with few tropes in a story.  Not everything has to be 100% original for it to work.  Europa Report is a good example of a small(er) budget sci-fi film that works, despite some of the tropes.  In the best of cases, tropes are vehicles used to expose or familiarize the audience with a concept to make the story go faster.  If you see someone with a cowboy hat in a spaceship… you get an idea of their background.  In the worst of cases, tropes are used to make the story progress.

The bright part of all this is that there are some really good actors/actresses in this film.  The lead part of Ava (Gugu Mbatha-Raw) has multiple dimensions and is generally relateable.  Aside from one decision point that lacks adequate background, she does an admirable job of keeping the story grounded.  The rest of the cast does their part, given the limited character development.

The art is solid, the CG top notch.  The filming style is straight from the 90s, of running sideways down the same corridor, endlessly.  The foreshadowing shots are over the top.  I was waiting for the mustache twirl.

After thinking about it a bit more, there’s certainly a director’s cut of this film somewhere.  There are bits of the story that simply do not make a lick of sense.  Things randomly decide to “phase between worlds” when the plot needs them to.  Oh, someone needs to get hurt?  Let’s phase a body part away.  Oh we need to show something is lost?  Let’s phase it into a body part.  And what’s with any of the scenes on Earth?  They serve zero purpose.  Cutting all of that out, then adding in more space station scenes should have been priority #1.

The thing about JJ Abram’s and his fascination with the mystery box is that someone needs to know what that mystery is.  The joy of the gifts at Christmas is as much imagining what’s inside, as it is in opening them.  And you can’t have a mystery movie if no one is in on the mystery (for reference, see seasons 3+ of Lost).  And that’s the largest problem here – the mystery remains a complete mystery by the end.  There are zero answers given for anything other than “MAGIC OF DIMENSIONAL TRAVEL!”.

I like sci-fi movies for their potential.  The ideas and concepts often work as warnings or guidance to society.  Pandorum is a great example.  Cargo is neat too.  They both have flaws, and tropes, but they succeed at telling a consistent story.  Cloverfield Paradox comes close… very close, but never truly delivers on that promise.  I really hope some aspiring writer pays attention here – this is what happens when an idea is not fully fleshed out, and the editor is absent.  A rough draft, which is really too bad.  I so wanted this to work!

The only rational explanation of the final shot of the film (again, a sci-fi horror trope) is that this films tore holes in all dimensions.  In that Cloverfield 1 was in dimension A, and Cloverfield Paradox took place in dimensions B and C.  There are a dozen other questions after that statement.